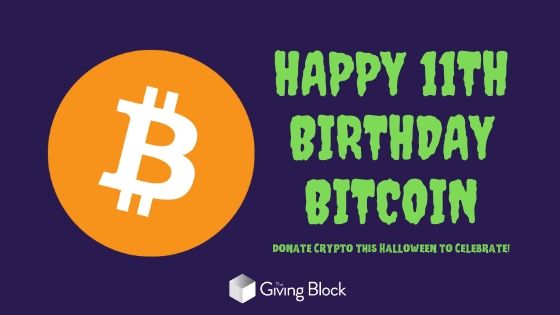 Whether Satoshi knew it or not, he forever transformed the nonprofit world with Bitcoin

This Halloween, October 31st, 2019 is important to the blockchain and cryptocurrency community for something other than costumes and candy – it’s the 11th anniversary of the day when, Satoshi Nakamoto, the anonymous creator of Bitcoin released the Bitcoin whitepaper to the world.

Since then, Bitcoin and its blockchain technology has had an enormous impact on the world of finance, supply chain, international development and thousands of other use cases. We now have thousands of cryptocurrencies but the original, Bitcoin, still leads the way, especially in the nonprofit space. Since the inception of Bitcoin, hundreds of millions, likely billions of dollars worth of Bitcoin, have been donated to nonprofits around the world.

Bitcoin Donations to Nonprofits are on the Rise

All of these donations to 501(c)3 nonprofits are of course tax deductible cryptocurrency donations – something that Satoshi probably wasn’t planning on when writing the initial Bitcoin white paper 11 years ago. The IRS classification of probably wasn’t top of mind when aiming to design a superior form of digital money.

So what does that mean in reality? To put it simply – cryptocurrency donations are treated very similarly to donations of stock. The donor doesn’t have to pay any capital gains tax when donating, and can write the amount off their annual taxes when they donate directly to a nonprofit that allows them to accept Bitcoin donations (and other cryptocurrencies such as Bitcoin Cash, Litecoin, Ethereum etc).

Without intentionally or not, Satoshi did the world a great service, creating a new asset class that can be an incredibly tax efficient way for supporters of their creation to fund their favorite causes and missions by donating some of their appreciated Bitcoin. This is especially important considering how much Bitcoin has appreciated since its creation – if someone had purchased (or mined) $100 USD worth of Bitcoin in 2010, it might be worth anywhere up to around $20 million USD based on Bitcoin’s current price.

At The Giving Block we firmly believe that one of the best ways to ensure that cryptocurrencies such as Bitcoin become more mainstream is with more traditional organizations (such as nonprofits) using and transacting with cryptocurrencies. If you want to see increased adoption, you can help by not only HODLing, but also by giving to organizations whose missions you personally support. Our mission is to eventually ensure that every single nonprofit in the United States not only understands what cryptocurrency is, but accepts, and eventually transacts with it as a form of donation. We do this through consistent outreach to nonprofit leadership, educating them on how blockchain, Bitcoin and cryptocurrencies work. We also help them with their own wallet solution that allows them to easily accept cryptocurrencies, generate automatic tax receipts for donors and have simple fiat off-ramps.

How Can You Celebrate Satoshi’s Creation for Good?

For this 11th birthday of Bitcoin, we are calling on Bitcoiners to not only ask “When Moon?” or “When Lambo?” but “When Charity?” by launching the #BitcoinTuesday initiative. What is Bitcoin Tuesday? Quite simply, it’s Giving Tuesday for cryptocurrency – what we hope will be the largest annual day of giving by HOLDers of crypto. Hundreds of nonprofits will come together in one (ironically, centralized!) location to fundraise cryptocurrency donations.

Are you ready to celebrate Satoshi’s creation by donating on #BitcoinTuesday? Start by publicly pledging to donate on twitter today. We’ll be supported by cryptocurrency industry leaders like Brave, Bottle Pay and many more.

And most importantly HAPPY BIRTHDAY BITCOIN!